Menu
REQUEST A FREE CALL BACK

How To Recognise Financial Abuse and Get The Right Help

The term “domestic abuse” conjures many different images for people, and for most, it is an immediate connection to physical violence. While many victims experience physical abuse, emotional and mental abuse is just as prevalent. Another form of abuse that is being recognised in its own right is financial abuse. A form of control for the abuser, financial abuse can be devastating for its victim.

What is Financial abuse?

Financial Abuse has been overlooked historically and is often referred to as economic abuse.

Financial abuse can be defined as the control that one partner holds over the other economically. It can involve:

Citizens Advice reported in 2015 that only 2 in 5 victims recognised this as a form of abuse, however, showing how little awareness still exists in this area. Coerced debt is becoming more common, and 75% of those who took part in the survey reported that they were coerced into applying for credit by their abuser.

What Is the Difference between Financial and Economic Abuse?

Why Is Financial Abuse So Serious?

Women’s charity, Women’s Aid, states “Economic abuse has a long-lasting, devastating effect. Many victims report that it impacts on their ability to leave the abuser and that when they do build up the courage to leave, some are left without a home and with nothing but the clothes on their back,”.

Most financial abuse victims don’t believe there is a way out and even if they manage to escape their abusive relationship, they struggle to start afresh because their credit rating is poor, and they are unable to secure accommodation or new credit. Many abusers control their victims in this manner, making them feel that they could not survive without them.

Why Is It So Important to Address Financial Abuse?

Manipulating money and other resources such as access to transport, food and clothing can have severe consequences and prevent the victim from leaving or seeing any future outside of the relationship. For this reason, it is recommended that financial institutions are educated in financial abuse and coercive control.

What Is Being Done to Tackle Financial Abuse?

The financial services industry is responding to the growing awareness of financial abuse and is stepping up its efforts to identify and support victims. So much so it has just been formally recognised as a form of domestic abuse in the Domestic Abuse Act 2021 which came into force on 29 April 2021. The Act refers to this form of financial abuse as “economic abuse” which is defined as any behaviour that has a substantial adverse effect on a person’s ability to acquire, use or maintain money or other property, or obtain goods and services.

In league with Co-op Bank, Women’s Aid is calling on the financial services industry to adhere to a new voluntary code of practice that aims to support victims and treat them more compassionately.

The code calls on firms to identify and raise awareness of financial abuse:

Where Can I Get Help with Financial Abuse?

There are many great support networks out there to help if you feel you are a victim of financial abuse, and you can seek help or advice from the free and confidential helplines below. 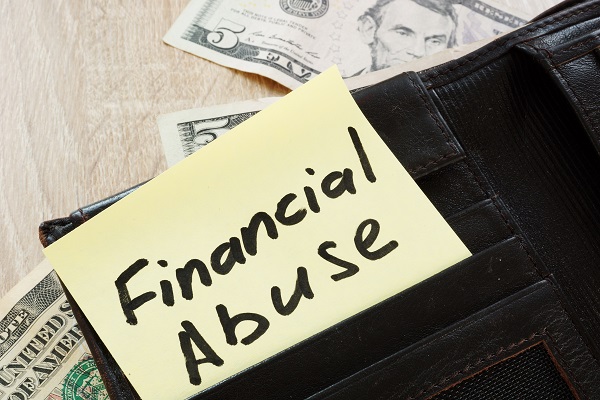